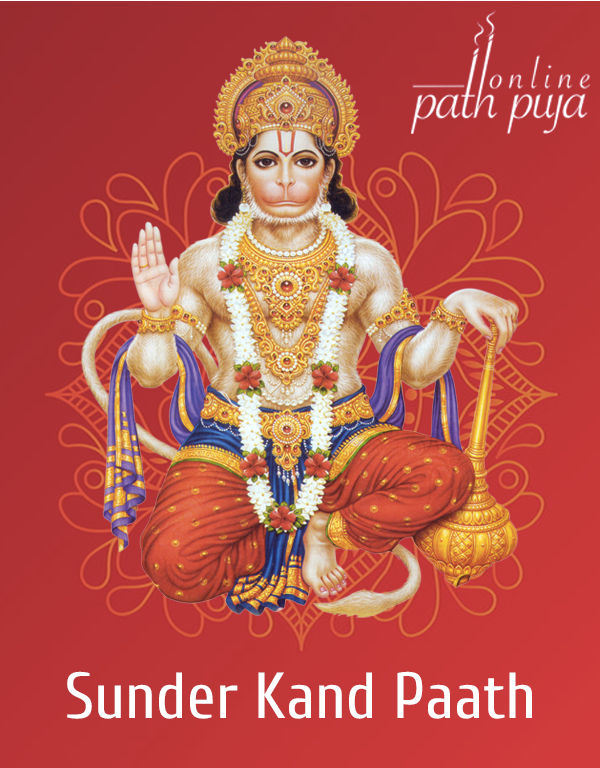 This Sundarkand Path  with be performed in World's Oldest Existing City & Capital of Hinduism - Kashi (Varanasi).

Below are more auspicious places for performing Sundarkand Path  in Kashi & Your Puja - Japa will be performed in Vedic way at either of these places.

What is Sundar Kand?

About Sundar Kand and Lord Hanuman: Sundar Kand is the name given to the 5thKand (chapters) in Valmiki Ramayana and Ramcharitmanas. As per mentions in various scriptures, Shri Hanuman ji was fondly called ‘Sundar’ (beautiful) by his mother Mata Anjani and hence, Sage Valmiki chose this name for the 5th Kand too. But why is Sundar Kand so important? What are the benefits of Sundar Kand path? To know this, it’s important to know a few milestones in the entire story of the Ramayana.

About The Ramayana: It is the narrative of Lord Rama’s life. The epic was written by many in multiple languages, but only two works remained prominent: Sage Valmiki’s Ramayana, and poet Tulsidas’s Ramcharitmanas. Valmiki was born in the Tretayuga and had written The Ramayana in Sanskrit language, in shloka form. He considered Lord Hanuman a human who belonged to the vanara (monkey) tribe and Lord Rama as a Mahapurush (great being) with tremendous power and valour. He divided the Ramayana into the seven major Kands (or chapters): Bala Kand, Ayodhya Kand, Aranya Kand, Kishkindha Kand, Sundar Kand, Yuddha Kand, and Uttara Kand.

Tulsidas was born in Kaliyuga, and wrote Sri Ramcharitmanas in Awadhi language in the forms of choupais (quatrain). Tulsidas believed Hanuman was a monkey, devoted to the service of Lord Rama. He renamed Valmiki’s Yuddha Kand as Lanka Kand.

Brief About Sundar Kand: The Sundar Kand is an episodic on Lord Hanuman’s journey from Kishkindha to Lanka in search of Mata Sita. Hanuman, reminded by Jambavaan of his supreme powers, strength and ability to fly, rediscovers his true powers and takes off in search of Sita.

What happens in Sundar Kand (the gist):

The Sundar Kand, therefore, details Hanuman’s victorious journey to Lanka – and how he succeeds against all odds using his wit, charm and intelligence. His strength, wisdom and vigour are celebrated in the Sundar Kand very beautifully.

Tulsidas’s Sundar Kand, often called the heart and soul of the Ramayana, has 3-shlokas, 2-chhan (verse or stanza), 58-chaupai (quatrain), 60-dohey (couplet) and around 6241-shabdh (words).

The importance of Sundar-Kand lies in the fact that it is that part of the Ramayana that alleviates the sorrow and despair of Sri Rama, Sita, Laxmana and the others. It is further believed that the same will happen to whoever reads or listens to the Sundar Kand– with ritualistic nitya karma anushtana, sankalpa, or engages the Vedic Brahmins for a paath-parayana, peace, prosperity and well-being will come to them.

Usually, people do Sundar Kand paath or parayana at home for specific purposes, but if one is able to conduct a Sundar Kand paath-parayana involving Vedic Brahmins with proper Sankalapa (Resolution), complete with appropriate rituals for a single day or 5,11,21,32, or 48 days, then the punya laabh (pious benefits) multiplies. Once the paath is over, annadaana (feast), daan (charity) etc., is done. By engaging Vedic Brahmins we indirectly get major benefits- like the ritualistic (anushtana-sankalpa) tenets is proper, the devotion, dedication and involvement is in a single direction. The Vedic Brahmins chant the Sundar Kand with proper pronunciation, style and meter and keep the time slot of Puja regular. They follow the proper orders as per the Vedic dharma and pray for our good wishes to be fulfilled.

The benefits of reciting, listening to or conducting parayana anushtana of the Sundar Kand removes afflictions, worries and mental agony, protects one from the malefic effects of unfavorable planetary positions, enhances the person’s will to live with hope, courage and confidence. It bestows peace, prosperity, financial gains, good luck and health.

The Sundar Kand Path is initiated on a Tuesday, Saturday, Full Moon (Pournima), New Moon (Amavasya) days,Deepawali or other specific day/s in accordance with a person’s birth chart, it will be very beneficial. Special importance is given to Tuesday as it is believed that it was on a Tuesday that Hanuman found Sita in Ashoka Vatika.

How to do Sundar Kand paath at home:

Keep a photograph of Rama Pattabhisheka (Ram Durbar), along with Hanuman’s idol or photo. Begin the parayana with dhoop, deep, sankalpa, Tulsi, and floral offerings, along with naivedya and aarti. Follow this with chanting Hanuman Chalisa and then reciting the Sundar Kand. Once the path is successfully over, again recite Hanuman Chalisa and Bajrang Baan. This must be followed by naivedya, maha-aarti, pushpanjali to Lord Rama, and Hanuman, and ended with a namaskara (bowing to the Lord).

Some Mantras for chanting

Apart from reciting the Hanuman Chalisa, one can also chant the Rama Gayatri mantra, and Hanuman ji’s Beeja Mantra on a regular basis 21,32,48 or 108 times which has its own special importance and benefits.

The Sundar Kand teaches us how we can win over every difficult and unfortunate situation in life if one decides to do so. And if one can’t follow the anushthana of the Sundar Kand paath, one can regularly recite the Hanuman Chalisa till time is conducive to conduct a paath. Chanting Hanuman Chalisa with dedication and devotion removes negative energies and impediments in life.