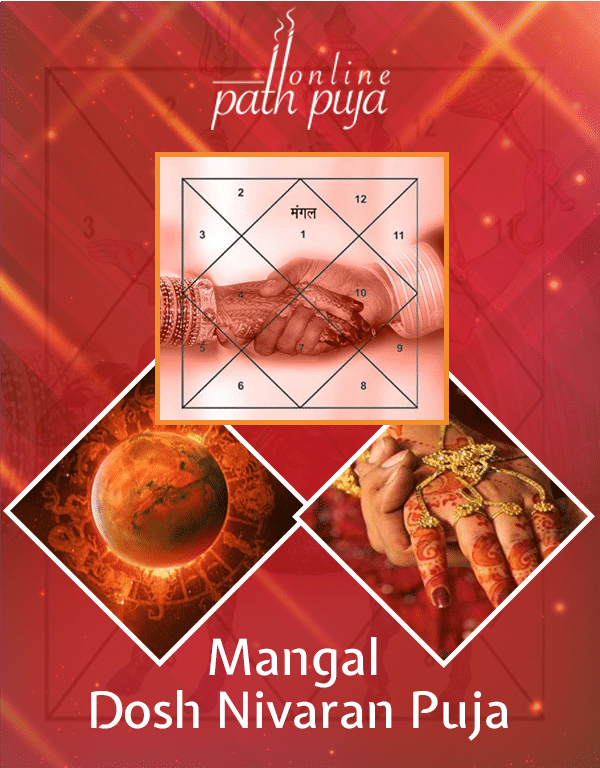 Below are more auspicious places for performing Kaal Sarp Dosh Nivaran puja in Kashi & Your Puja - Japa will be performed in Vedic way at either of these places.

Mangal dosh is referred to by other names too, like Bhauma dosha, and Kuja dosha respectively. This Mangal dosh affects both males and females in common as per their individual Kundlis or natal chart.

According to the Vedic astrology in a natal chart of an individual, the Navagraha’s play a major role, and amongst them the planet Mars or Mangal Graha holds a very specific place in the celestial council of the nine planets. The Mangal Graha is a fiery planet; it is considered to be the most aggressive one in the lot and is supposed to be said that it always keeps an eye on its foe. However, the planet also acts as a soldier protecting the individual too.

What are the 5-Houses of Mangal Dosh:

Mangal dosh occurs when the planet Mars is placed or seated in any of the 5- houses in an individual’s kundli or natal chart which consists of the 12 houses. The five houses wherein the Mangal Graha can be present are the 1st, 4th, 7th, 8th, and 12th house of an individual’s kundli (horoscope). Those males or females having the placement of Mangal Planet in any of the 5-houses in their charts would carry this dosh of Mangal Planet and are called Mangliks in our Hindu Sanatana Dharma way of life.

What are the ill-effects of Mangal Dosh:

What is Manglik Dosh?

When marriages are fixed, as per our Vedic Sanatana Dharma almost every Hindu household member goes by the Kundli or natal chart of the individual who is supposed to get married. If a person has a Mangal dosh, normally the marriage keeps getting delayed, thus the natal chart needs to be seen.

Any person (male or female), born with the Mangal dosh being present in the five houses- 1st, 4th, 7th, 8th, and 12th house with certain combinations is called a Manglik person.

If the Mangal dosh is not seen or rectified initially before marriage, it creates highly unfavorable conditions in the married life causing hurdles and unwanted turmoil such as financial instability, job/ professional discomfort, and many more. Further once married, the life of such couples undergoes non-stop tensions, discomfort levels in everyday life, and unhappiness continues which leads to separations most often.

People look for proposals wherein the boy as well girl both have Mangal dosh in their Kundli, if both the partners are Mangliks then this Mangal dosh gets nullified and the malefic effects of the Mars planet gets negated, while the couple has a blessed and happy married life to follow.

When one of the people (male or female), is a Manglik while during the marriage, then the negative effects of Mangal dosh can be nullified or canceled by performing the ritualistic puja Kumbh Vivah, and multiple dosh pariharas (correction of dosh) rituals.

As per the Vedic Hindu Astrology ritual a Manglik person (Mangal dosh person) goes for a mock wedding, wherein the person is made to marry a Banana or Peepal tree, if not then otherwise to a silver/ gold idol of Lord Vishnu respectively.

The people with the Manglik dosh are said to keep fast are on Tuesdays and pray to the Mangal Graha, Lord Hanuman, and Vishnu.

Some objects that are considered to be offered to please the Mangal Graha, are swords or knives, food items that are made of red lentil pulses (masoor daal), Rotis, bread (wheat), silk clothes in red color, and corals.

To reduce as well nullify the ill-effects caused by the Mangal Graha, a ritualistic Puja-Archana, Abhisheka, Japa, Hawan/ Yagna can be done along with Kumbh Vivaah, etc.

Performing these pujas on Tuesdays is considered very effective to negate the ill effects of Mangal Graha and the dosh rectified. The Vedic Pundit/s performing the same will do the puja rituals with a proper Sankalpam (vow), with Name, Nakshatra, Rashi, Gotra, and many more.