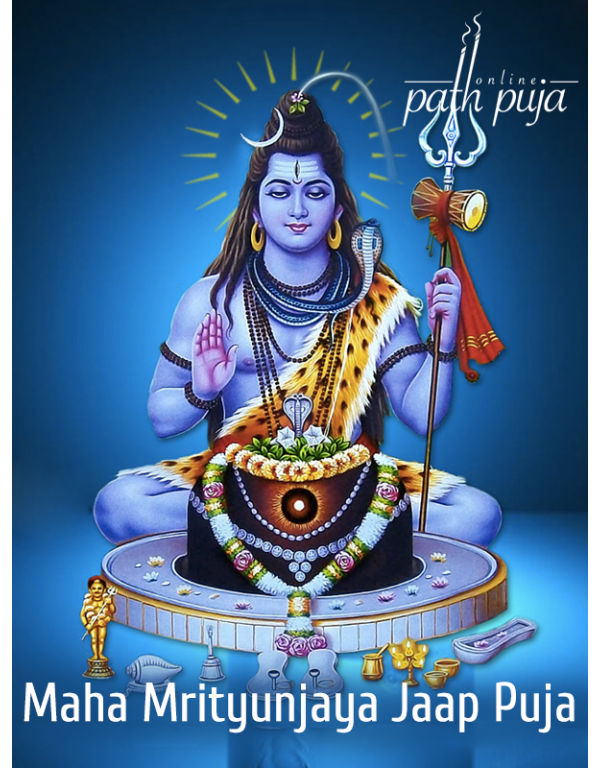 Below are more auspicious places for performing Mahamritunjay Jaap Puja & Puja - Yajna in Kashi & Your Puja - Japa will be performed in Vedic way at either of these places.

The Mahamrityunjaya Mantra & Vedas: It is a sacred and effective mantra for the appeasement of Lord Shiva, found in our Vedas, authentically in the oldest Vedic literature, the Rig Veda (7.59.12). Mahamrityunjaya Mantra is attributed to Rishi Vashishta, said to be the son of Urvashi and MitraVaruna. He is one of the Saptarishis, who authored the Mandala 7 in Rigveda. The verse also recurs in the Yajurveda (TS 1.8.6.i; VS 3.60)

Significance and belief: The Mahamrityunjaya refers to a collective blend of words, and when combined and read as a whole, it means ‘the great victory over death’. It is a significant mantra for the Hindus. It is believed that this Maha Mantra is effective and beneficial for one’s mental, emotional, and physical health. The mantra removes fears and heals us holistically, while bestowing upon us longevity, warding off calamities and preventing untimely deaths.

Origin and legend of Mahamrityunjaya Mantra

There are three different legends linking back to the origin of the Mahamrityunjaya mantra. The first one is associated with Rishi Markandeya born to sage Mrikandu and his wife Marudmati. They worshipped Lord Shiva for begetting a son as a boon. Pleased by their prayers, Lord Shiva decided to grant them their boon, but gave the couple a choice: They could either have an intelligent son with a short life span, or a child blessed with longevity, but little intelligence. The Rishi couple chose the former, and were hence blessed with a righteous son who was destined to die young. They named him Markandeya – the one who is very intelligent. Markandeya worshipped Lord Shiva – on the day he was to die, the Lord of Death, Yama, came looking for Markandeya. But he was oblivious to Yama’s presence as he was busy worshipping Shiva Linga. Yama threw the noose to capture Markandeya, but unfortunately, the noose went around the Shiva Linga, too. Enraged, Lord Shiva appeared in his Rudra avatar – furious with Yama for his mistaken act. Yama quickly spared young Markandeya’s life, and granted him amaratva – a life of eternity. Subsequently, pleased with his bhakti, Lord Shiva revealed the Mahamrityunjay mantra to Markandeya – urging him to spread it to the world, and end human misery.

The second legend associated with the Mahamrityunjay mantra is about how Lord Shiva reveals the powerful mantra to the spiritual leader of the demons (Daitya Guru Shukracharya) as an art of resurrection (Sanjeevani Vidya). However, instead of keeping it a secret, Shukracharya shared this sacred mantra with  Dadichi rishi. And once, when King Kshuva was on death bed, Rishi Dadichi used this mantra and saved the life of the king. With time, Mahamrityunjaya mantra became a life-saving mantra for everyone.

While the third legend has it that the mantra is a Vedic verse found in a portion of Rigveda that was composed by the revered Sage Vashistha.

Now, let’s see how this maha mantra benefits the human race, and the right way for chanting it. An important aspect of the  Mahamrityunjaya mantra as per the dictats of the Shiva Purana and Markandeya Purana, is that it is formed after completing the Mrityunjaya mantra with bija, kilaka and shakti mantras and the three vyahrtis of Brahma Gayatri mantra. It is as follows:

The Mahamrityunjaya Mantra Jaap: The jaap is done with a vow (sankalpa) for the beneficiary (the Yajman), taking note of his name, nakshatra, gotra, etc. towards the fulfillment of wishes and desires (ishtakamyarth siddhi). The jaap is performed by Vedic Brahmins meditating with rudraksha beads. The jaap is performed to cure chronic illnesses of a person and gain longevity. It is chanted on birthdays, and other auspicious occasions, and for warding off ill-effects of planetary placements that cause fear of death, etc.

The Maha Mrityunjaya mantra jaap count can vary from daily ritual (nitya anusthana) of 108, to 1.25 lakh, along with the number of Brahmins meditating with a sankalps for a yajman over a certain period, followed by strict Vedic tenets.

Dedicated to Lord Shiva, the Maha Mrityunjaya Puja also begins with a sankalpa (vow), with the Vedic Brahmin/s performing the puja with abhisheka to the Shiva Linga. The offerings are milk, curd, honey, water from the holy Ganges, along with other elemental ingredients. Various other ritualistic offerings – with dhoop (incense), deep (oil-lamp), archana, naivedya, aarti, etc., are also offered to the Lord. Archana is the offering of flowers chanting the numerous names of the Lord and naivedya, the food offerings. Aarti is the chanting of hymns while showing the Lord to His devotees in the light of the oil lamp). After this ritual, blessings are sought from the Lord for good health, happiness, good fortune, and prayers to rid one of all problems in life.

Maha Mrityunjaya Homam/ Yagya: The Homam ritual is once again performed by Vedic Brahmins with sankalpa of the yajman. The homa/yagya karma is performed with the various ingredients, the ahootis to the Fire God. This includes medicinal herbs like giloy, gudchi, amrita, durva grass, etc., apart from clarified butter (ghee). According to the Rigveda, the Maha Mrityunjaya Homam aids in expanding one’s lifespan while reducing the serious and immediate dangers to life itself. The homam also helps in pacifying the negative effects of the planets in one’s horoscope.

Highlights: The Mahamrityunjaya mantra’s first benefactor, Rishi Markandeya later wrote the Markandeya Purana while residing at a place near the trekking route to the Yamunotri shrine in Uttarkashi, Uttarakhand. Today, that place is famous as Markandeya Tirtha.

As per our scriptures, the place where Lord Shiva revealed the Mahamrityunjay mantra to Markandaya and blessed him with longevity, is on the banks of river Gomati in Kaithi, Varanasi, in Uttar Pradesh. Today, you will find an ancient temple here, desecrated as Markandeya Mahadeva Temple. The holy place where the sacred river Ganga and Gomati unite is the Sangam – this place of confluence of the rivers is considered to be a thousand fold more sacred than the rivers.

But, there is one other legend, too. It is the one that narrates how this event happened in Kerala – at the site of current day’s Triprangode Siva Temple. The narrative describes how Markandeya ran up to the Shiva Linga inside the temple to escape Yama, and how Lord Shiva appeared to grant Markandeya longevity and the Mahamrityunjaya Mantra.