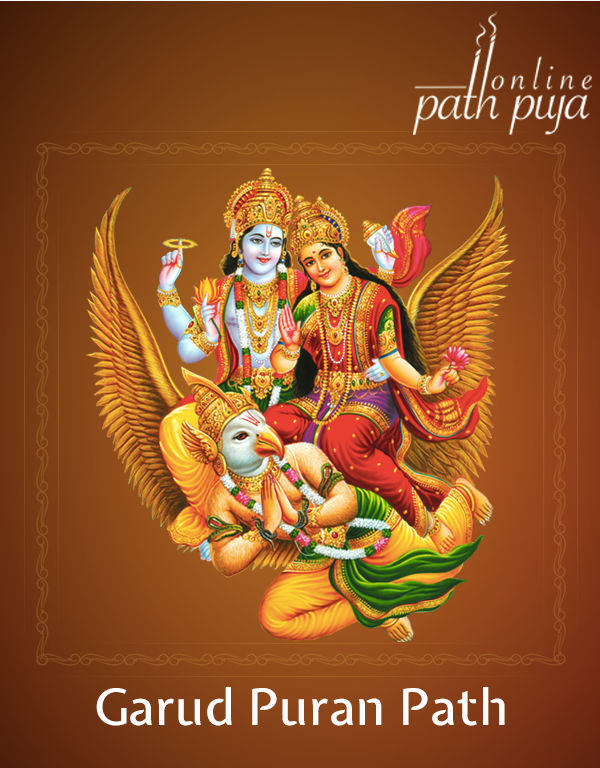 After Deat & Before 10th Day Ritual.

Sage Veda Vyasa, who had narrated the great epic Mahabharata, to Lord Ganesha is also considered to be the compiler of the 18 Maha Puranas of the Hindu Sanatana Dharma. All the 18-Maha Puranas are dedicated to the Tridev of Hinduism (the Trinity) –Lord Brahma the Creator, Lord Vishnu the Preserver, and Lord Shiva the Destroyer. Garud Puran is one of those eighteen Puranas, which is primarily intended to focus on Lord Vishnu, Vaishnavism, and many more.

What is the Garud Puran?

If we focus on the Garud Puran, it describes different types of austerities, methods of worship, atonement for sin, and divine and many sacred mantras (hymns), etc. The Purana is almost like a two-way communication with question and answer, dialogue sessions carried out between Lord Vishnu and Garuda (King of Birds), which is the Lord’s vahana (vehicle) for movement from one place to another.

It is said that the Garuda watched the 13-day rituals of dead humans from the sky and had doubts about human’s life and death cycle, the journey to hell, Yamaloka, (the death God’s abode) reborn in other yonis, (rebirth in some other form other than humans) and salvation. Thus a series of mystical questions raised by Garuda and answered by Lord Vishnu to quench the thirst for knowledge is seen in Garud Puran.

Lord Vishnu talks of the importance of rituals

Overall, Lord Vishnu discloses the meaning of life and details of life after death. He also highlights the proper ritualistic way of funeral rites and reincarnation of the departed soul if proper funeral rites have been performed at the time when the body is consigned to flames. Apart from all this, there are many more important topics of relevance in the Garud Puran.

The Garud Puran is available in many languages

Garud Puran has approximately 19000 Shlokas and is classified as Satvik Purana. The Purana is further divided into two more parts, the Poorva Khanda (first part) and Preta Khanda or Uttara Khanda (second part) respectively. As per scriptures and belief, it is said that after Lord Vishnu had narrated the contexts to Garuda, the Garud Puran was later recited by Garuda to Sage Kashyapa and from him, the Purana further filtered down the line. However, earlier the Garud Puran was in the Sanskrit language only, but today it is available in multiple languages with meanings for a better understanding.

What are the other contexts in Garud Puran?

The Garud Puran’s major section – approximately ninety percent is the Poorva Khanda that emphasizes and discusses a wide range of topics associated with life and living. The remaining ten percent is supposed to be the Preta khanda or Uttarakhanda, which deals primarily with rituals associated with death and cremation.

Swarg and Narak, rebirth and other topics

The Garud Puran contains contexts like the theory of Swarg and Narak (heaven and hell) with the details of karma and rebirth cycles, all about ancestral rites, Yoga, theory on mineral, stones, gems, detail on rivers, the importance of Godheads, and their relationship, all about human ethics, personal development, and the self-knowledge benefits and their do-don’ts, diseases and their symptoms, cosmology, astronomy, mythology, medicinal uses, prophylactics, astrology and all about planets, Vaastu and architecture types for building home or temple, economy, duties of an able king, rulers, literature, Hindu calendar, Hindu philosophy and many more.

When & Why is Garud Puran to be read (paathan), Listened to &other beliefs?

This Purana talks about Life after Death, and the Sanatana Dharma Hindus as a ritualistic routine keep a reading session (paathan) after the death of their beloved ones at home or elsewhere. The belief is that the departed soul attains salvation or moksha (liberation from the cycles of rebirth) and hence an arrangement of a Vedic Brahmin is made, who reads the Garud Puran and explains the meanings of the shlokas to the persons present.

Should Garud Puran be read only during death rituals?

As per the scriptures, Garud Puran is supposed to be read at home only when someone has breathed his last and during the time of death rituals. Many even arrange for a Vedic Pundit or Katha Vachaks who specialize in this specific Garud Puran Katha Paath only.

Of the soul’s travels and Garud Puran

Garud Puran is a summary or mere description of the journey of the departed soul from Preta Loka to Pitru Loka, over the 13 days from antyeshti to the 13th day (namely Udagashanti day or Trayodasha or Pitri sthapana day). The Garud Puran is customarily read from the 4th day of death of a deceased person till the 11th day. It is preferably read in the evening time when all the family members are present. Thereafter on the 12th day, the other concluding ritualistic ceremonies are performed. Some even follow the reading of Garud Puran on the 13th day when the family members, relatives are present on the day of Trayodasha day or Udagashanti day, wherein the Brahmin reads out with mentions of, how the soul must have one to the nether world of the Pitrus.

The law, and karma and moksha

Listening to the Garud Puran for 13 days, this is the time when the soul takes to make its journey to the next dimension from earth’s space to the heavens. Garud Puran dwells on the law and fruits of karma (action), moksha (Salvation), and numerous varieties of punishments for the sins committed throughout one’s lifetime. It gives a detailed description of the exquisite rites, its rituals, and the ceremonies starting from the death day till the completion of one year.

What is the Faith and belief behind this?

As per belief, when a person passes away, and the soul leaves the body and is present at the Lord’s feet, and here what begins an assessment for the soul of their (poorva karma) past life results and deeds and now where their future life will be decided for them. Finally based on one’s good or bad deeds, one might take rebirth in another yoni (cycle of life) or they might attain Moksha or salvation.

The Garud Puran, hence as per the faith and belief, is supposed to guide and give instructions to the departed soul as regards which path to take and follow post-death. It offers the righteous path and salvation (Sadgati and Moksha) to our ancestors' souls.

The reading session (pathan) of the Garud Puran is meant for the fulfilment of the soul's wishes, happiness, and peace on this world (Earth) and in the other world (heavens).

How does one escape from the cycle of rebirth?

If a proper post-death ritual has been performed including recitation of this Garud Puran, then the belief is that the ancestor’s soul gets rid of re-birth and happily graces the doer with his/her blessings including all others in the family lineage.

In these thirteen days, we all follow the soul with our emotions somehow, we pray, do rituals, we feel the loss by pain, compassion, emptiness, we try to involve ourselves in the ritualistic ceremonies and maintain the serenity it needs to convey a sense a loss of a beloved person leaving for his/her abode.

Those who listen to the Garud Puran on the occasion of their parents' demise will be blessed with intelligent progeny and their parents' soul will attain salvation. And the other keen listeners who part take in the reading session of Garud Puran with faith and dedication for sure learn the real meaning of life to lead by avoiding sorrows, sufferings and possibly be blessed with peace, prosperity, and well-being.

Garud Puran paathan is done as per the karta/ shrotas (kriya performer and other listeners) request by family members of the deceased to listen to the Purana’s summary and how the soul gets salvation etc. Apart from the ritualistic traditional way, with the lighting of the lamp, incense sticks, flower offerings, prayers and naivedya (food items), etc. and the reading session in progress the gathered members undoubtedly take along with them the learning’s of the Garud Puran and in their remaining life try to abstain from misdeeds and look forward to a peaceful life. They try to atone their past regressions and pray to the Lord for happiness and well-being. Finally, the Vedic Brahmin is given the dakshina and his blessings are taken for one’s future well-being.