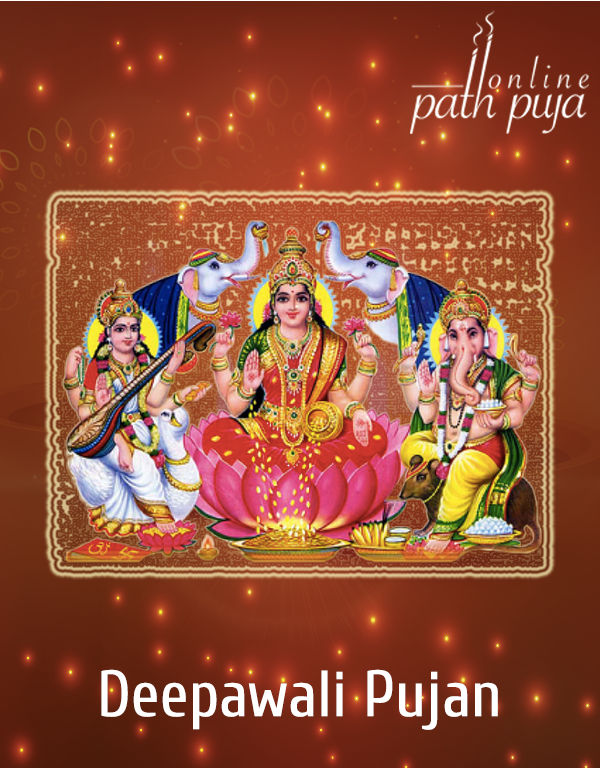 Auspicious Muhurta Deepawali till the time of Muhurta.

Below are more auspicious places for performing Deepawali (Diwali) Puja in Kashi & Your Puja - Japa will be performed in Vedic way at either of these places.

What is Diwali or Deepawali?

Deepawali is also referred to as Diwali by most of us. This Sanatana Dharma Hindu festival, Deepawali which is celebrated worldwide, commonly for almost a five  or say precisely for 5-days is undoubtedly filled with celebrations, happiness, family bonding, prosperity, and many more.  Deepawali is usually celebrated twenty days after the festival of Vijaya Dashami (Dusshera) which falls immediately after the Shardiya Navaratri Durga-Puja occasion. (9-day festival during the winter season)

Deepawali marks its entry with Dhanteras, Dhanvantari puja, then Naraka Chaturdashi, and then Lakshmi Puja day, followed by Dhanavantari Puja, Govardhan Puja & Balipratipada, and then comes Bhai Dooj and lastly the Vishwakarma Puja.

How are Epics connected to Diwali/ Deepawali?

(Diwali is connected to the Ramayana & the Mahabharata)

The Hindu households connect the festivity with the two great epics, the Ramayana and Mahabharata respectively. Basically, the Indian populace of East, West, North, and South celebrate as per their age-old tradition and ritualistic ancestral following. However, the people in North and South India connect the festival celebrations accordingly; In North India, people celebrate the festival of Deepawali with great pomp and show along with ritualistic traditional fervor and link it to the return of Lord Rama, Mata Sita, and Lakshmana from 14-years of exile to Ayodhya after defeating the demon king Ravana of Lanka. While people in the southern parts of India, celebrate Deepawali in connection to Pancha Pandavas ending their 13-years of exile on this day. Hence in southern parts of India, the festival starts with the day when Lord Krishna along with his wife Satyabhama killed the Asura (demon) Narakasura, thus the celebration of Naraka Chaturdashi just a day before Deepawali happens here.

References of the Diwali Festivity:

Deepawali and other Religious faiths:

The Deepawali celebrations go on for 5 to 7 days, and the best part is that each day and God-Goddess, myths, rituals, and puja celebrations are associated accordingly in our Hindu culture. On any festival occasion, we all prefer giving a clean and neat look to our worship place, overall on the Deepawali festive occasion, most of the populace whitewash, buy new furniture, utensils, gold, silver, new clothes, etc. Almost every Hindu household glitters with oil lamps; electric bulb series and rangoli (motifs/ designs) made at entrances of home as well workplaces.

First Day, Dhanteras: Dhanteras is derived from the Sanskrit word ‘Dhana’ which means wealth, while Trayodashi refers to the 13th day before the Amavasya or the New Moon day as per Hindu calendar. People, on this auspicious day, buy gold, silver, or utensils as per their choice, convenience, and budget. On this day people also worship Lord Dhanvantari (God of Ayurveda). Worship and conducting of puja through Vedic Brahmins at their homes, factories, and offices invoking the God & Goddesses for prosperity, well-being.

Second Day, Naraka Chaturdashi: This day is supposed to be the 14th day (one day before the New Moon Day), the Hindu families celebrate the victory over the demon Narakasur’s demise. People in other parts of India, especially South India, celebrate Deepawali on this day, get up early in the morning adorn new clothes, buy sweets, do puja & fireworks, etc. In North India it is called (little/ small) Chhoti Deepawali, people visit their family, friends exchange gifts on this day.

Fifth Day, Bhai Dooj: This day represents the true bond between brothers and sisters. The legend of Lord Yama, (the God of death) and his sister the Yamuna, (river Yamuna) is associated with this day Bhai dooj.  On this day, the brothers go to visit their sister/s, who welcomes him/ them with a tilak (a mark by Sandal paste and vermillion as a mark of protection and greeting), aarti is done and food and gifts exchange marks the festival.

Significance of Lakshmi Puja on the day of Deepawali:

Goddess Lakshmi is a gesture of prosperity, power, and the giver of wealth and wisdom. She bestows upon Abhaya and Gyaan in her right hands- (basically Abhaya Gyana Pradayini). The golden pot of wealth is seen on her left hand, which indicates (Dhana Dayini), one who will grace her blessings through prosperity in the form of gold coins. Goddess ‘LAKSHMI’ is the one who blesses with the significance of dharma, artha, kaama, and moksha. On this day people worship, offer puja, conduct havan, etc. to the 8-divine forms of Goddess Lakshmi.

What all Abhisheka, Puja, Havan, Jaap are conducted in the festive period of 5-7 days:

On each specific day during the Deepawali puja Mahotsav many Hindu households invite Vedic Pundits to conduct the varied abhisheka, puja, havan, pathatmak puja, mantra jaap, etc. for their well-being, prosperity, and many more. The following things are done as per one’s demand, choice, and ritualistic Vedic practice of their ancestors.

Lakshmi Puja done on any day is equally considered good, but special prayers rendered on the Diwali are auspicious, bestows upon the doer and his family with material and religious riches. The Goddess removes all hurdles in one’s life and provides contentment. Thus we, by performing the Lakshmi Puja on Deepawali day,  get the blessings of the Goddess in her divine 8-forms, while we overcome hunger &  poverty, failures & debts, loss of wealth, and financial crunches as well hurdles of any sort for that matter. Offering special puja through Vedic Brahmins on this day brings specific advantages in the family of one and all. Thus many offer religiously Vedic scriptures prescribed puja to the Ashta Lakshmi’s (eight forms of Goddess Lakshmi) to be graced & blessed by the Supreme Goddess. The eight forms are defined as under: